Do You Want To Know More?

Many Wing Commander fans are not familiar with the concepts being thrown around with the Wing Commander Arena announcement -- Xbox 360, Live Arcade, MS Points? It can all be pretty daunting for an old school PC gamer. So if you're Wondering what a Gold Subscription is and whether or not you'll need one for Arena, then you should check out our Xbox FAQ! If you have a question or concern which is not listed, please e-mail us and we'll figure it out!

If you don't have the bandwidth to download the 230-megabyte Wing Commander Arena video interview from GameSpot, don't worry -- we've put together a text transcript. All the dialogue is from Electronic Arts Line Producer Sean Penney:

Xbox Live Arcade, it's a great platform, it is very innovative, and we wanted to do a space shooter and we wanted to get on to Arcade. Everyone loves Wing Commander, I certainly do, and we were excited about the thought of putting Wing Commander IP with a 16-player action space shooter. So we've got a single player experience and a multiplayer experience. In the single player experience you can unlock ships by playing through a variety of modes. We have training modes, melees, a couple special modes where you're just blowing up asteroids, others that are just total mayhem, and those go on to leaderboards that go online, but I think where the real meat of it is is the, the online play. We've got sixteen player gameplay, which includes 8 on 8 team play or sixteen player free for all play. We also have one on one duels. And we have a specialized arena called the Bearpit where you can have two people go into the pit while the other fourteen wait outside and they can do all sorts of things like shoot at each other or play minigames or shoot inside the Bearpit. We've got capital ship versus capital ship, and there's going to be a lot of strategy there. We've got a capture the flag mode called satellite and then in the free for alls it's, you know, pick your favorite ship and take on the world and we've got specialized environments for them all.

So what we've got in the capital ship versus capital ship is you, you choose a side. You choose to be either Kilrathi or you choose to be human, and that's something you couldn't actually ever do in any of the previous Wing Commander titles. You couldn't play the Kilrathi, and we have nine Kilrathi ships that you can choose from and nine Terran ships that you can choose from. So you choose a side, and each side has their own capital ship, and each capital ship has three levels. On each level there are a series of turrets and missile launches which will be firing at you as you try to destroy them. If you destroy all of the devices and weapons on one level of the capital ship the capital ship actually drops down a level allowing you to then destroy all of the devices and all of the weapons and laser turrets that are on the second level of the ship. If you accomplish that the ship drops down to the final level which is the bridge. Once you destroy the bridge, the ship will break into three pieces and blow up, and you have won the game. So, so your goal in the game is to either attack the capital ship or defend your own capital ship.

So there's eighteen ships total. Each race has three base ships: a light fighter, a heavy fighter and a bomber. Each of the base types has three variations. So, one of the things that the original Wing Commander did was it allowed you to upgrade your ship, and when you upgraded your ships armor, for example, you would get better armor. You wouldn't get more of it, it would be a different alloy. It would be supersteel or duralloy or plasteel or these types of things, but in an arcade game, it's hard to communicate that visually, because arcade games are very visual games, it's not a first person shooter. So what we wanted to do was change the silhouette of the ship, so when you get an armor upgrade for your Arrow it takes on a different silhouette. It gets more armor. So there's three variations of the Arrow, three variations of the Rapier and there's three variations of the bomber, the Broadsword, and on the Kilrathi side it's the same thing. We've got the light fighter, the Darket, the heavy fighter, the Dralthi, and the heavy bomber, the Paktahn, and there's three variations on each one. It's a bit rock paper scissors. You can destroy a heavy bomber with your light Arrow, but you're going to have to play pretty carefully.

Three different types of pickups. There's regenerative pickups which will heal you or it will refill your missiles. Pickups that will enhance you, things like Hammer Shot or Cheap Shot which means it increases the damage you do or it increases your speed or it allows you to fire more often and then a third type of pickup we have is special pickup. These are quite rare, but these are things like energy absorption or supershields or wingmen, which gives you a clone of yourself. One to two would fly beside you and mirror all your actions. So if you fire weapons, they'll fire weapons so you can essentially triple your firepower with these guys.

It's an arcade game, so you want people to be able to just pick it up and play it, but it is a Wing Commander title, it is a space combat game, so you want to add some depth to it. So it's pick up and play, but there's layers of depth. It's the old adage that it takes a moment to learn but a lifetime to master, and I don't know if it would take you a lifetime, but there's a whole series of advance maneuvers, there's extra devices, so with the right stick you can do barrel rolls, you can do flips, you can do immelman turns, you can do 180s and different ships have different special maneuvers that they can do. So Wing Commander Arena should be out early summer.

Thanks to Goliath for reporting this! GameSpot has posted a new interview -- a video conversation with producer/lead designer Sean Penney! This seems tailor made for people who are worried that Arena won't live up to the series legacy. Quotes include: "Everyone loves Wing Commander, I certainly do. And we were excited about the thought of putting the Wing Commander IP with a 16 player action space shooter." and "It's an arcade game, so you want people to be able to just pick up and play it. But it is a Wing Commander title - it is a space combat game, so you want to add some depth to it. So it's pick up and play, but there's layers of depth to it." Stream it online here or download a copy here (231 mb, .WMV). This is what you'll find inside: 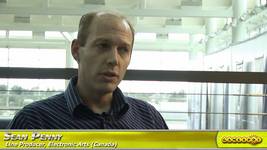 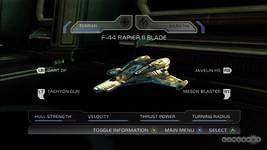 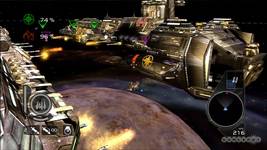 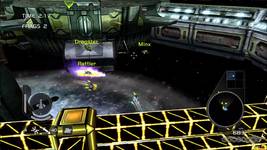 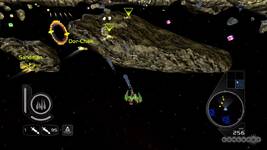