Flags Of Our Sons

Bob and Shaggy have been working on recreating the Confederation flag as it appears in the Wing Commander Movie. Their source image is intentionally weathered and without color, so there is some room for debate on the specific design. Bob's composition emphasizes subtle stripes present in the original picture, while Shaggy relies more on color to contrast certain areas. Klavs also recently outlined a black and white variant that is slightly different as well. They all began working on flag designs independently, so it's interesting to see how each turned out. You can help provide feedback at Crius.net. 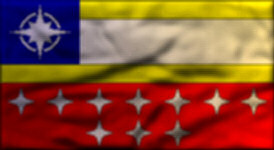 Bob: I should emphasize, once again, that the color scheme in this - and in every other version - is purely speculative; we don't actually know what the colors are, and I based the ones here on the flags at the end of Wing Commander IV. 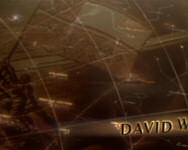 WingFan06 has posted the first chapter in his story titled 'Wing Commander V: Eternal Vigilance'. A prelude was released a couple of weeks ago.

Eternal Vigilance is my adaptation of what I think should have happened a month before and 5 years after Wing Commander IV, this is in no way ‘Canon’ as most Fan Ficts aren’t... So, a few of the things we know in the Wing Commander Series may change. View this, as an alternate reality if you will... I'm just trying to see how this idea would play out, so. Everyone who reads I appreciate any feedback!

Keep in mind since some things have changed, I'm going to write as if Prophecy never happened 'Hence the reason why I number this as Wing Commander V'. The reason being, I have different ideas for what happens before and after TPOF. Firstly Col. Blair was exiled from Con-Fed for being a Traitor, and it was never found out that Con-Fed was starting to become corrupt... So, in fact Con-Fed is now becoming its own worst enemy.

You can read the short prequel story and the first chapter here. Let him know what you think!