The response to Klavs' Flight Ops fan art was very positive, so he took some time and bumped up the size to make some high resolution wallpapers for everybody. This is a fantastic scene that we can't get enough of. The larger images are still based off the original 1024x render, but a few finishing touches were reapplied at the higher res. Wing Commander fans who aren't caught up on their novels should check out End Run, Fleet Action and False Colors to learn more about Escort Carriers like the TCS Tarawa below. 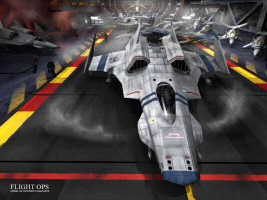 "Sir, our flight deck is already crammed to the gills," Jason said.

"Then it'll be even more crowded," Banbridge replied.