The Best Just Keep Getting Fatter 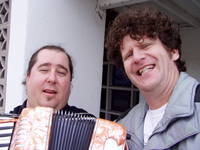 Alkarion reports that The Fatman is continuing to answer people's Wing Commander questions over at the Quest Studios message board. Here's a sample:

Q: There is a tune in the WC1 Demo that is neither played nor included in the full game's MUSIC.MID archive (uploaded here). When was that music originally supposed to play?
A: I'll listen later, but if it's the one I think, it was just a sketch, and they rejected it. Bad tracking of assets caused it to be included on the disk.

Q: Some WC1 MIDI files, even though the music changes tempo, are constantly playing at MIDI tempo 120 and thus don't fit into the beat/measure grid at all. Was Origin's MIDI file player unable to handle the original tempos?
A: Ha! Nice catch! I bet it's this: Govett composed on, I think, an Atari or an Amiga, and I was on a Mac. The way we transferred files when all else failed was to run a "play" cable out of his rig and multichannel record into mine. No Sync.

Q: There are some strange meta events in the files --- normal meta events start with FF, but these start with FE --- I assume they have something to do with the interactive music player. Did you insert them, or the programmers at Origin? What sequencing program were you using?
A: I think there were two things we futzed with: setting percussion to "orchestral," and possibly setting up reverb. See if those fit. I used MOTU Performer on a mac, and Govett used... ? Too obscure. You have Govett's email address-ask him.

Q: Some files don't initialize all channels properly, i.e. there is no volume or panpot for some channels, only a program change. Are they supposed to be played with the MT-32's default power-on settings, or should they just use whatever settings the last song set the channel to, for variation? The game itself seems to use the latter method, but I'm not sure that sounds right in all cases.
A: I bet you ten bucks it was a Dave ****-up. Smile You can only tell a genius to do so much...

Q: Do you happen to remember which LA device you composed your MT-32 scores on (MT-32 with ROM version below 2.00, MT-32 with ROM version 2.00 or above, LAPC-I/CM-32L, CM-500/CM-32LN/LAPC-N)? Just curious, because they all have very subtle (and sometimes not-so-subtle) differences with regards to how the music sounds.
A: It's right here. An early MT-32 SN 853800 with the Beaverton modification. Geeky enough for you? Smile

Q: The Origin Audio CD Vol. 1 has an extended version of "Tolwyn's Office" with bars not included in the game's version (here is the shorter version as heard in the game). Do you still have that MIDI file? Smile
A: Likely yes, but likely not readily available. And I don't know what "Tolwyn's office" would be. I think it's one we would have called "Debriefing," perhaps.

Q: Do you still have design documents or early development versions of Wing Commander tunes?
A: Yes. My favorite is a copy of the original treatment for "Squadron," which I picked up from Chris the first day we met. I ceremonially burned the original [joke intended] at the "We Created Worlds" goodbye-to-Origin party.

Q: Who came up with the idea to make a continuous dynamic soundtrack?
A: From where I stood, it was Chris Roberts, who came up with it I _think_, after he heard Dave's original piece, and after the project was under way.

Q: How was the number and length of the tunes coordinated?
A: It was all born of inexperience. First they wanted a combat piece and a briefing piece, etc. The direction was "kind of like Star Wars meets Star Trek the Movie." After the idea for interactivity was brought up, they wanted a bunch of short tunes for combat, such as "the missile is chasing you," "you are chasing the missile," "your wingman has been hit," etc. The music team was not involved in decisions--we just delivered what was requested.

Q: Also I'd like to know which sound card/module got the most attention in the composition process. Did you first compose on the MT-32 and then convert to the Adlib? Btw, the sound effects in WC1 are marvellous, both on the MT-32 and on the Adlib (my favourite is the missile-lock sound effect on the Adlib).
A: I was only told that I was being hired to do an MT-32 score, and I knew nothing about Adlib until the game shipped. Marc Schaefgen was the badass who made the Adlib sounds, and he remains a badass to this day, now at Midway in Austin. Here we are on a trip to Dallas to attend a Grammy-related event, cough cough. There was beer and a VFW post involved.

You can join the conversation here.