Since it's been more than a year and a half since our last update, many Wing Commander fans have assumed that Team Fat's Reorchestrated Wing Commander Album was cancelled. LeHah has managed to generate another status update on the project however, and although it's been on the back burner for quite a while, the project is not dead yet. Here's the word directly from the Fatman himself.

The album is all sequenced out in its MIDI form. Dave has decided, however, _not_ to just take the old MIDI files and re-instrument them, but rather he wants to key the notes all in again, by ear.

Ready for this one, though?

The Amazing Dave Govett is now a cop. He graduated near the top of his Academy class, and was, I'm pretty sure, their best marksman and their best driver. Yes, he is such a cool policeman that the crooks he arrests actually call the police department to tell them how great he was.

He's currently getting only nominal pay while he does on-duty training for the post he wants, so he's doing a sound library project for cash. He chose to do that rather than rush through the WC project. So, his studio is back on line and better than ever, and I've been told WC is Hot on his To-Do list.

George "Fatman" Sanger and Dave Govett were responsible for the original soundtracks to Wing Commander 1&2. They've been working on a commercial reproduction of classic WC music, although the project has been stalled lately. One bonus track has been released and occasionally makes the live circuit. You can download the WC1 Surf Theme here.

After the surprisingly success and quality of Prophecy Advance, we began covering new space combat sims for other handheld game systems and mobile devices. Darxide EMP is another portable space sim designed for Pocket PCs and Nokia Series 60 phones. The game is built around colorful combat, but players must also earn resources to upgrade their ships and prepare for more intense scenarios. David Braben, one of the original creators of the space trading game Elite, also contributed to some of the game's design. The handheld version of this game is a remake and enhancement of the original DarXide released for the Sega 32X. Bits of story are presented via brief cutscenes with recorded voice talent. Controls were designed to be either left or right handed, and Pocket PC users can take advantage of touch screen functionality. Darxide EMP retails for approximately $6.99 and has received many positive reviews. Microsoft awarded it with the "Best Game on Pocket PC" recognition shortly after its release in 2003. The game is currently on version 1.78 with various bugfixes and additional levels. 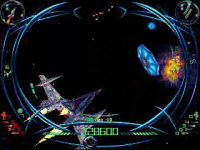 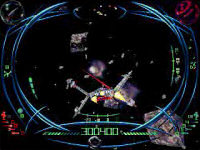 We have put a lot of effort into game-play balancing to produce a well-pitched learning curve. To progress you need to continually upgrade your ship with pick-ups. In addition to the 'quick fix' of destroying things, there is a variety of different, well structured, increasingly challenging mission criteria which mean that thought is required as you progress - enemies have different weaknesses and attack modes, and need different strategies to overcome them. Later on in the game you also have to manage resources - for example as lasers get more powerful they deplete your energy quicker, requiring you to hunt energy crystals.