Here's another set of awesome advertisements from old issues of Computer Gaming World. Alkarion grabbed these from issues of the magazine published in the early 1990s. Like the last set, these are creative ads that are full of tough talking verbiage and feature original takes on familiar Wing Commander art.

The first image is a 1992 advertisement that covered the entire series released up until that point. It's hard to imagine, but WC1, WC2 and their four add-on campaigns were all released within a two-year time span. The novel Freedom Flight and ports of the original Wing Commander for the Super Nintendo and Amiga were still in the works as the second Special Operations pack rolled out of the factory. These original titles account for some 160 missions and quickly established Wing Commander as the premiere space combat simulator and interactive movie. The middle strip is a Spring 1991 advertisement promoting the release of the second Secret Missions title. Both games in the ad pioneered the expansion disk concept and were created very quickly to seize on Wing Commander's surprise success. The last ad plays on the film strip concept also seen on the WC2 box. Long before Wing Commander 3's live actor FMV made its debut, the WC series was already known for its cinematic storytelling and lifelike characters. Origin emphasized this by showing scenes from the game in distinctive film reel highlights. The bullet points at the bottom also remind us just have revolutionary this all was at the time. WC2's digitized speech made Soundblaster a household name and kicked off the multimedia PC era.

Last year, ORIGIN defined the state of the art in computer games... Now, we're doing it all over again.

Can Furballs Really Fly? There's only one way to find out. Jump into Wing Commander, the game series that defined interactive entertainment on the PC. You're whisked to the front lines and left in the middle of an intergalactic brawl with a bunch of flea-bitten, battle-scarred felines from Kilrah. 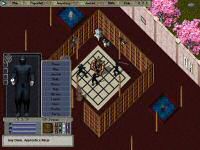 EA has cracked down on the illicit gold trade in Ultima Online this week, and new measures are in place to prevent certain exploits in the future. A whopping 15 trillion (15,000,000,000,000) gold pieces were removed from the total UO economy and almost 200 offending accounts were banned. GameSpot ran the numbers versus current prices for UO gold on eBay and determined the real world value of the seized gold to be at least US $15 million and as high as $60 million. When the developers closed a loophole that allowed people to accumulate so much gold, a number of legitimate users were affected. The instructions to tell proper players how to find their money seem hilariously complex.

We realize that some of checks for amounts over one million gold were created by players who did not intend to exploit or harm the game. The vast majority of these checks have been automatically replaced with separate checks equal to the total amount of the replaced check, which can be found in a brown bag where the original check was located. If the check was inside of a container, you will find the brown bag in the same location as that container. Please note that in some cases the brown bag will be underneath the container, so you will need to move the container to access the bag. If the check was in your backpack or in your bank box, the brown bag will be located in your bank box.

In rare cases where we could not safely convert these checks, the checks were automatically placed in a red secure container with the label, “Please contact a GM about this item.” These containers will not decay, so you may page a GM at your leisure to convert the checks. Please note: If these containers reside in a house, the house owner must be present.