Impressive progress continues to be made on the upcoming WC4 Homeworld 2 mod. The Durango Class Light Carrier has been added to the fleet, and it looks great. Check out the images of it ripping stuff up and taking hits below. Most carriers are big vulnerable boxes without their fighters though, and Aaron Thomas has fixed this by adding all the Border Worlds fighters. The new Vindicator was the last one left. A cute little UBW satellite drone also made the cut, and it looks like it has some teeth too. 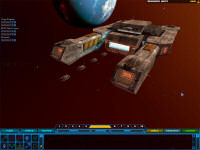 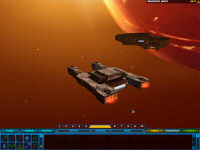 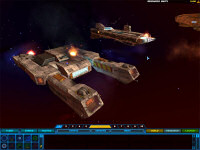 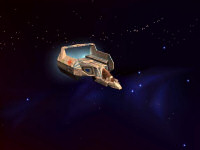 Aaron is now working on sound effects for the project.

I have been hard at work on an aspect of the mod that I can not post updates about in the usual fashion. As of last night all fighters have full WC sound, weapon fx and weapon sound fx. It feels so good to hear some familiar audio, and I can definitely tell you it's taken the feel 'up a notch'! I would like to thank Stefan, my friend over at the HW2 forums, for his valuable time and help on getting the fx started. He was kind enough to donate me a few files to help me understand the process and get the fx overhaul underway. Going to spend tonight coding the respective damage capacity of each specific weapon into the mod. I'll try to post a few pics, though gunfire is an effect to be heard and seen in realtime to get the actual feeling.