Dry Land is a Myth

Alkarion has found something very interesting: an April 1991 Computer Gaming World article about professional artists working on video games -- which, it's hard to believe, was a fairly new concept at the time. The exciting aspect for Wing Commander fans, however, is the picture seen below (left): a landscape which was designed for but not used in the original Wing Commander. The caption reads: "'Water World' (Glen Johnson) Landscape removed from Wing Commander." Where could it have appeared? It's anyone's guess -- but a water planet, Hurricane, does appear in one of Wing Commander's winning/losing cutscenes -- it's pictured below (right). If you're interested in this sort of behind-the-screens minutiae, be sure to check out our document archives.

Interestingly enough, Origin hired Denis without knowing for sure whether they had enough work for a full-time artist. A couple of weeks later, however, they noticed that he seemed to be booked up until the year 2000. Now, the company boasts seven full-time artists and might need more...

Asked what technology would most change the way computer game artists did their work, Loubet had two observations. He would like to be able to do sketches on the computer via graphics tablets and wishes Disney's Animation Studio software was available for the IBM.

Check out the full article here (high resolution). Edit: Check out this later update for more theories on the water world.

Here are a few other classic magazine scans donated by Stone48420. These come from GamePro in 1993 and 1996. The earlier article is a review of the Super Nintendo port of Origin's Ultima VI by FCI. Although the game gets points for being huge and immersive, the author feels like it might have been too complex. It's described as a more tedious alternative to Zelda and Final Fantasy. The second article is a preview of Ultima Online. A small blurb calls the upcoming game revolutionary, but little did they know at the time how accurate that would be. In the ten years since this issue was printed, Origin's preeminent multiplayer title has helped shape the online gaming world as we know it. 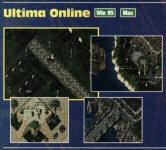