Get Insurance For Your Fighter

Maj. Striker has created a video which is a parody of a series of commercials for an American insurance company. Perhaps insuring yourself against pirate attacks could be a feature in a future Privateer game. Striker had this to say about the idea.

I've been working on a WC type animation and last night a thought came to me to do a quick commercial. I work for Nationwide Insurance and if you've seen some of their recent commercials they have that tag line, "Life comes at you fast." I had the inspiration to make a quick commercial off of that. I went and quickly rendered this scene and threw some things together. I thought it was quite funny and since it is quasi WC related, I thought I would pass it along to you guys. 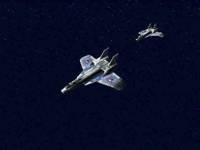 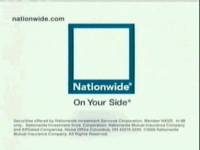 You can download the video here. I didn't see the pilot in the video eject so I'm not sure he'll be claiming on his policy. Hopefully he had life insurance at least.

Veterans of the alt.games.wing-commander newsgroup will remember Gary Hladik's fan fiction known as Wing Commander 4.123106: The Price of Entertainment. The thirty four instalments were posted to the newsgroup between the dates of August 18, 1996 and August 29, 1997 and parodied the story from the WC4 game whilst adding some of its own twists. If you have never read the story before, it is well worth a look.

If Wing Commander IV were approached from a somewhat less reverent point of view, I wondered, what kind of humor could be extracted from it? My own answer to that question is found in the fanfic story "Wing Commander 4.123106: The Price of Entertainment," which debuts next week on alt.games.wing-commander.

While not exactly a comedy, this rewrite of the Wing Commander IV story tries to be considerably more lighthearted and uninhibited than the original. It follows the same general storyline, but I've rewritten every existing cut-scene and added many new ones. I've kept the same Wing 4 characters (although Pliers has a new job), added many new ones, and brought back a few more of the Wing 3 cast (guess who!). The story is told in the first person by none other than the Heart of the Tiger himself, which means of course that the story omits all cutscenes in which Blair is not present, e.g. the opening sequence of the attack on the transport Amadeus.