There's a new website online that's dedicated to the history of video games, and it has a specific angle on how to do so in an interesting way. The Game Innovation Database catalogs the first implementation of new ideas in electronic entertainment. By capturing the innovative firsts of the gaming industry, the people who run GIDb hope to create an exciting picture of how the modern landscape came to be. Wing Commander has a number of entries in the database. Particularly noteworthy subjects include First Use of Giving Specific Commands to Allies, First Use of System Specific Damage with In-game Effects and First Discretely Branching Plotline Based on Player Performance.

In Wing Commander as the players ship took damage, specific systems would be damaged or destroyed, such as weapons, engines, communications, radar, etc. Damaged systems would begin to malfunction and destroyed systems could not be used at all. Thus if a weapon was damaged, it would fail to fire sometimes and if it was destroyed it would cease to function all together. If the communications system was damaged, it would malfunction sometimes and instead of the normal menu of command choices, only static would come up. If it was destroyed, commands could not be issued to your wing men at all. The level of damage controlled how often a system malfunctioned. If the engines were damaged, the player's speed and acceleration would begin to decrease. Wing Commander was perhaps the first game to use system specific damage that had real, in game effects.

Because of the project's wiki-nature, it's difficult to automatically confirm whether or not each innovation was actually a first. But it's definitely true that Wing Commander was one of the first to do quite a number of things. Off the top of my head, the site could also use an article about Wing Commander's dynamic music that changed depending on combat status, its variable AI that fought with greater tenacity as the odds became more grim, and its expansion disk - The Secret Missions was a surprising success. You can read more about the GIDb project at the BBC. 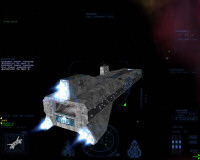 In other news, there's a tiny WC Saga status report. Here's what the team has been working on these last few weeks.

Tolwyn and Lars are finishing the Intro, we have a new beta-test running and besides that we're doing some polishing work on boring stuff like creating a readme, faq, credit stuff, testing the install routine and so on.....

Besides that, some of us started doing work on the main campaign again, so that at least the time is not wasted. We hope to have some more interesting news soon.