Pun Alert: The Lord Of The Wing Trailer Made

Plywood Fiend has created another Wing Commander themed video clip for everyone. This time it's a bit more creative than a simple music video. He has synchronized the Lord of the Rings: Return of the King trailer to various scenes from Wing Commander 3. The harsh landscape of Kilrah mirrors that of Mordor, Aragorn's ancient sword is symbolized by the Behemoth and the good guys are portrayed by the crew of the TCS Victory - complete with Gimli being voiced by John Rhys-Davies. It's a fun clip that everyone should check out. You can grab the 32 meg wmv for yourself here. 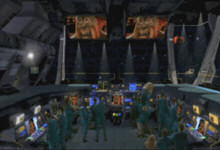 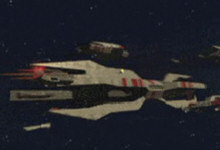 While eddieb may have been spending a lot of time playing with robots recently, he has been able to patch a few new additions in to Flight Commander. The intended audience for the new version 1.3.3 patch is anyone involved in modding or creating new missions for the game.

You can download the patch from here. eddieb is also a programmer for NASA's Jet Propulsion Laboratory. The JPL held an Open House event last weekend showcasing their various projects, and eddieb posted this photo of himself with a robot ballet dancer. I'm not sure what use ballet dancing robots are in space, but it looks very cool anyway. 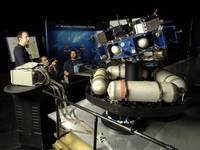