The famous Origin Museum collection has changed hands! Following a brief period of negotiations, the museum has been purchased by gaming media giant IGN Inc. The startling $10 million transaction transferred a plethora of amazing artifacts to IGNs control, including an original Akalabeth, a Mount Drash cassette and over five thousand copies of Ultima 7: The Black Gate.

Former curator turned shipping magnate Joe Garrity, posing below with part of his new fleet of 'Privateer' luxury yachts, said that the sale occured because it was in the best interests of preserving Origin history. For their part, IGN hopes to refocus Joe's incredible work from recording Origin's history towards promoting the future... of McDonalds' new Dollar Menu. $1 Double Cheeseburgers? Space Rogue is lovin' it! 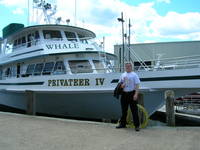