Get A Closer Look At A Saga Mission

The WC Saga team has put together a summary of a typical strike in their upcoming Freespace mod. Missions begin and end with traditional carrier landings that are designed to be flown manually. Autopilot has been added to the engine, and regular combat includes a number of familiar Wing Commander themes. The battle pictured below pits two opposing cruisers together. With friendly fighter support, the Confed warship can take out the Fralthi II. You can find more screenshots and descriptions at the WC Saga website. 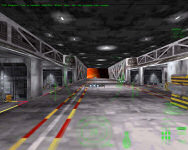 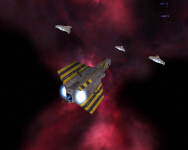 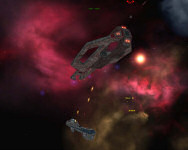 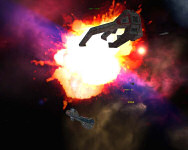 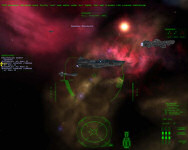 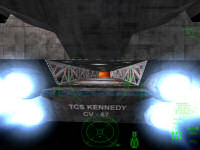 What would WC be without autopilot and nav points, two features that were not present in Freespace 2? We received a nice code feature that allows us to autopilot to different mission areas without any loading cycles between the nav points. Our autopilot function doesn't show an automatic flyby scene, but it uses a “real traveling” system. When the autopilot is engaged, the ship steers itself and the engine slowly engages up to a 64x time compression, otherwise it could take quite some time to get to the next area.

Don't forget that tomorrow is your last chance to catch the WC movie in high definition for a little while. CineMax is airing the 1920x1080 version at 6:15PM on the east coast, and 9:15PM on the west coast. It has been more difficult than we thought to capture the high resolution movie, so if anyone has the ability to take screenshots, let us know so we can do a quality comparison. Meanwhile the regular version of the movie can be seen throughout the rest of this month and all of April.

In the year 2564, a rookie fighter pilot and his pals hold the fate of the human race in their hands during an outer-space war between humans and a nasty race of aliens. Based on a popular video game. Also with Tcheky Karyo, Jurgen Prochnow (The Seventh Sign), David Suchet and David Warner (Titanic).