New Nexus Mod Gets A Name

Exarch continues to impress Wing Commander fans with fancy vessels for his Nexus mod, Wing Commander Apocalypse. His latest conversions are the Fralthi II and Midway classes. The Kilrathi cruiser is pretty much just a straight import with some bump mapping, but the megacarrier is sporting a great new high resolution finish. Exarch has written a basic story outline, but the plan is for this to be a multiplayer skirmish pack first. 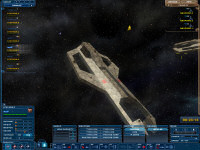 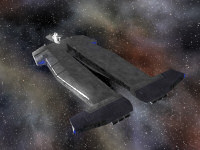 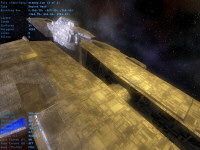 Wing Commander: Apocalypse is a total conversion mod for Nexus: The Jupiter Incident. It is meant as an unofficial sequel to the events in Wing Commander: Prophecy and the Secret Ops expansion.

Despite Wing Commander being a flight simulator, Nexus: The Jupiter Incident was a prime choice for my vision for this mod. For one, it gives Wing Commander fans something completely different to play with. My plans are to have the Nephilim return in much greater force with a large fleet of capital ships at their disposal; thus, Nexus was perfect for capital ship battles such as these. And Nexus is just a beautiful looking game.

Yes, I am the only person working on this mod. Sometimes it will be difficult to put out updates with school and work happening at the same time. However, I am just as excited about this project as everyone else, and despite being alone, I have been making substantial progress in a short amount of time. I don't plan on this mod dying, nor do I believe it will take years to complete.

Many people are anxious awaiting news on HCl's Prophecy Multiplayer project, but the wait doesn't have to be quite so long for everyone. One of the classic holy grails of the Wing Commander community was to get Wing Commander Armada working online. HCl finally achieved this major milestone last year. While you're waiting to blast eachother in the Vision Engine, now's a great time to practice against live opponents in the original Wing Commander multiplayer game. You can find instructions on how to get set up here.