We've had some questions as to exactly what the ships listed in this week's poll are. Don't feel bad if you don't know them all -- not everyone can be Ivan Borger Jr.! Here's a brief rundown of each destroyer:

Valiant-class Destroyer: The Valiant-class is largely unknown. It was mentioned only briefly in Wing Commander: Action Stations. By the time the war started in 2634, they were already old: Ensign Tolwyn was surprised to notice "an ancient Confed Valiant class destroyer" at Gar's Emporium. 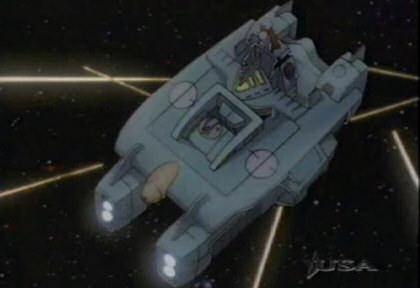 Achilles-class Destroyer/Transport/Fighter Transport: Achilles-class hulls appear to be the workhorses of the fleet in Wing Commander Academy. The ships serve as destroyers (TCS Ajax), transports (TCS Suffolk) and Fighter Transports (TCS Morgan). An Achilles-class ship also appears in the show's introduction sequence. The ships carry three Dual-Mount Laser Turret, one Single-Mount Laser Turret and one Dual-Mount Missile Turret... along with a 19-ship fighter complement. The Achilles-class should not be confused with the later TCS Achilles, a Heavy Cruiser destroyed by the BWS Intrepid shortly before Blair's defection... nor Achilles, a mining station in the Troy System... nor "Achilles," a Tiger's Claw pilot in 2654.

Exeter-class Destroyer: The Exeter-class was the first destroyer we ever loved... or, at least, the first one we ever saw: other than the Tiger's Claw, the Exeter was the only Confederation warship seen in the original Wing Commander. Notable Exeters include the Carraway, the Formidable, Gwenhyvar, Johann, Mitchell Hammock, Oregon, Talmud, Trygvie Lie, U Thant and the Vindicator. The Exeter's armament consists of six Dual-Mount Laser Batteries, four Single-Mount Laser Turrets, one Triple-Mount Laser Battery and one Spiculum IR Missile Tube. Exeters also boast an 18 ship fighter complement.

Paradigm-class Destroyer: The Paradigm was the only Confederation capital ship to appear in Wing Commander: Privateer. Commodores Reismann and Uhler both commanded Paradigm groups, and the powerful ships could be found engaging in anti-terrorism, anti-piracy and border defense missions throughout the Gemini Sector. The Paradigm mounts five forward guns: two Meson Blasters, two Tachyon Cannons and an Ionic Pulse Cannon. Earlier models have a Triple-Mount Laser Turret and a Triple-Mount Mass Driver Turret. Later versions replace these with a Dual-Particle Cannon, Single-Ionic Pulse Cannon Turret and a Dual-Neutron Gun, Single-Ionic Pulse Cannon Turret. The two versions have different missile loadouts as well. The initial Paradigms carried ten Dart DFs, two Spiculum IRs and a Javelin HS. Later models double the Javelin HS loadout and replace the Darts with eight Pilum FoFs. The TCS Paradigm herself appears in an Origin FX screensaver model, the appropriately titled TCS Paradigm. That same ship was the Confederation's flagship in 2664! Coventry-type Destroyer/Minelayer: The Coventry-type may not have an official name... but it's certainly one of the most popular destroyers, owing to its appearance in Wing Commander III and Wing Commander IV! Two of the Victory's escorts, the TCS Sheffield and the TCS Coventry, were of this class. The class predates the war itself... but a design upgrade at some point added the capacity to carry a half-squadron of medium fighters (in fact, we know the name isn't Coventry-class specifically because the Coventry is newer than the Sheffield). Coventry-type ships mount nine gun turrets: nine dual-mount laser turrets or eight dual mount laser turrets and one dual-mount antimatter gun. They are also modified for use as minelayers and frigates.

Durango-class Heavy Destroyer: The Confederation retired the Durango-class in 2663... but the Border Worlds didn't -- the famous BWS Intrepid began its life as the TCS Delphi! The Durango is a heavy favorite in this poll specifically because it's the one destroyer Wing Commander fans are intimately familiar with... having served off of one throughout most of Wing Commander IV. Durango-class ships carry eight dual laser turrets and several torpedo tubes. The Coventry-type Destroyer may well be older than the ships that appeared before it: the Gilgamesh and Exeter-classes... but when we see them they have modern paint schemes -- similar to the newly produced Vesuvius-class. So, naturally, one wonders: what might the Coventry-class look like during Wing Commander 2 (circa 2665)? Well, Marc has an answer... and it certainly impresses me! 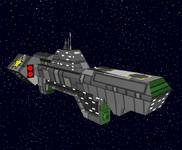