Raiders of the Lost Capital Ship

As we reported several days ago, Quarto has reached into the guts of the Vision engine and pulled out a ship: the Copernicus-class Planetological Research Vessel. Well, the ship is now available for download for use with Wing Commander Prophecy. Head over to KillerWave's Wing Commander Site, where you'll find her in the Ships section. The Copernicus is completely unarmed and Quarto has constructed a new VDU image for her.

Copernicus-class Quick Facts: The model is named "Nautilus" internally. The ship's proper name comes from Wing Commander Prophecy's ICIS Manual. The only Copernicus-class ship ever seen in continuity is the TCS Devereaux, named for "Angel" Devereaux from Wing Commanders I through III -- though one wonders if the unclassified research ship TCS Tsiolkovsky, which played an off-screen role in Secret Missions 2 and Wing Commander 2, might be of a similar design. Introducing the Nephilim with the destruction of a research ship is an interesting mirror to the original Wing Commander, which claims that first contact with the Kilrathi occurred with the destruction of the Odysseus-class explorer TCS Iason. 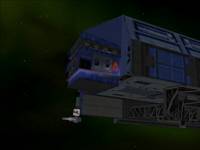 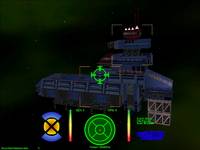 John Cordell reports that the Mac OSX version of Gemini Gold 1.01 is now available for download here. Gemini Gold is a modification of the recent 'Privateer Remake' fan project, aiming to fix many of the initial project's glaring flaws. There has never been an especially large Wing Commander fanbase among Macintosh users, owing to Origin's having only ported three titles to the system... but anyone should be happy to add Gemini Gold to their Mac-apacity! 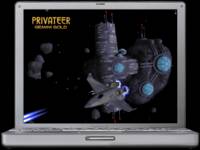