Tour The Waterloo With Marc

Last month we reported on seperate efforts from Marc and Bob McDob to model the Waterloo class cruiser inside and out. Marc has released an animated 360 degree view of the outer hangar and elevator area. Don't stare at it for too long or you'll need a Spacesick Sack. 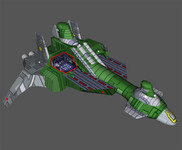 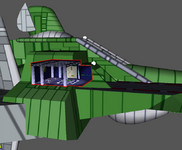 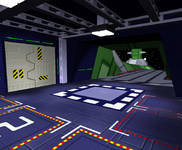 The first two renders give you an idea of where you are on the ship, the third thumbnail links to the 750 kB animation. Click the discuss link to let Marc know what you think.

There's been a buzz for the last few years as people have noticed the cover athletes featured on the annual Madden NFL releases have suffered unusual bad luck. Electronic Arts' cover announcement is highly anticipated each year, and the selected athlete typically considers it quite an honor. Donovan McNabb, pictured on the front of Madden 2006, is the latest to suffer from the supposed curse. On Monday night McNabb sustained a serious "groin injury" that will likely need surgery before long. Whatever luck the real life players sustain, EA is having a great time with its football franchises and exclusive NFL & AFL licenses. This year's Madden sold more than 1.7 million copies in its first week alone. In addition to its NCAA College game, it will debut two new series in the spring of 2006: Arena Football and NFL Heach Coach, a strategic fantasy football simulation. EA now controls 75% of the North American sports game market, up from 68% last year. Sports titles account for roughly a quarter of video games sold. EA shipped five titles for the new XBox 360 this week, bringing the number of platforms supporting Madden 06 to nine.