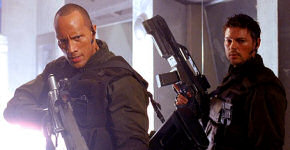 This weekend marks an event that gaming veterans of the 1990s all assumed would never happen: the release of the DooM movie. CIC DooM Spinoff correspondent Asher Frosty Lawson says the movie is a must see... and pretty much every movie reviewer in the world says it is not. We've all heard that before, though! More importantly, however, DooM brings 1999's Wing Commander movie to the minds of many reporters assigned to cover it. Here's three recent DooM articles that discuss our film:

Wing Commander (1999) Two words: Matthew Lillard. That should be enough to keep you away from this bomb about a team of space flying aces. No? Then how about Freddie Prinze Jr.? I always thought female lead Saffron Burrows would have made a good Lara Croft, though, given the same upper-body digital enhancement Angelina Jolie received.

MTV - Rewind: What Happens When Movies Get Game?

Any attempt at giving Maniac from "Wing Commander" a fully fleshed-out personality in a movie seems almost as silly as sticking a car chase in "The Hours." But leaving the characters without any personality or depth makes for a bland, nonstop-action pic — and that's no good, either.

But whereas the dire movie versions of Super Mario Brothers, Wing Commander and Resident Evil all represented some attempt to force the game universe to conform to cinema's rules, filmmakers are increasingly willing to let the dynamics and imagery of gaming dominate.

We'll keep you updated as the DooM movie inspires more people to think about Wing Commander... whether it's in a good way or not!

What a Difference a Day Makes

Following yesterdays update (and today's DooM-theme), AD has posted two new pictures from his TCS Victory Half Life 2 level. The level now features more detailed textures and lighting... and it's beginning to look a lot like a Light Carrier. 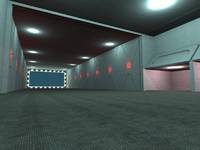 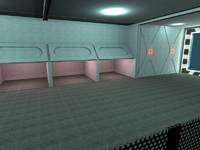