RPG Expanding Against All Odds

The fan role playing game WC Against All Odds has been enjoying considerable success this year. They've increased the number of simultaneous games in operation and added fighter combat to their mix. Now's a good time to check them out if you're interested in Wing Commander fantasy life. Their forums are where the primary action takes place.

We've been having a grand time over at the WCAAO (Wing Commander Against All Odds) forum. Though we are primarily a Fleet Action style RPG we've added in a squadron of Fighter Pilots serving on the front lines. In addition we've launched new Campaigns in the Vega and Gemini sectors in response to a number of new players who have joined our ranks.

We're certainly enjoying the current expansion, and we'd like you to enjoy it too. We have plans to add at least two more campaigns to the RPG, and if Fleet Action style combat isn't your style - stop by for some of the other RPG. It's pretty engaging.

WCAAO isn't the only active RPG. Check out our June Roundup for links to a few other games fans conduct online.

Milary is build a Wing Commander ships database for Prophecy. The stats are readily available in-game, but he'd like help creating movie files or animated gifs of the rotating fighters from the Ship Viewer. He's created a simple TigerShark poster in the mean time. If you think you can help, click the Discuss link below. 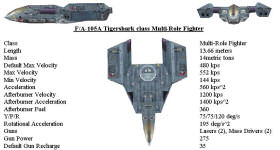