gulikoza's program to allow Wing Commander 4 DVD to run without the dxr hardware addon board has been updated. Parts of the patch have been completely rewritten with DirectShow fixes, support for specific system configurations and different compatibility levels. You can grab the 43 k pack here. Unzip the files to your WC4 DVD installation directory and run the configuration link if necessary. Don't forget to turn on Windows 98 compatibility mode in the Properties tab of the WC4 executable. If you have Windows 2000 or encounter other problems, additional optional patches may be necessary from gulikoza's website.

I'm really excited about the new dxmci version, I almost rewrote the whole thing. There's a new configuration dialog that allows you to set how DShow is treated in case you have problems. There are 5 levels - lower level means there will be a shorter delay when loading videos (but that of course will depend on your computer speed). The configuration is stored inside the dll itself, so there's no ini files or messing with the registry therefore no uninstall required. Configuration dialog can be found by clicking on the link file also in the archive or alternatively you can type 'rundll32 dxmci.dll,configuration' to get to it.

Wing Commander 4 DVD was only originally sold as part of the Creative Labs Encore 2x/5x DVD-ROM bundles, and Prophecy DVD was also given the high quality DVD treatment and scheduled to be included in a later Creative Labs set. Unfortunately it was replaced by a non-upgraded version of Freespace on a DVD, but AD has found a few mentions of the final product when it was slated for release. The first is a hardware site in the Czech Republic that mentioned the possible inclusion of the game in the original 5x drive bundle. The FilmLook company also talked about their role in the high quality transfer of Prophecy's video sequences.

AUSTIN--Origin Systems, producers of the legendary Wing Commander series of CD-ROM games, has completed postproduction and authoring of "Wing Commander- -Prophecy" for the DVD-ROM platform, with live action sequences shot in digital betacam and processed in FILMLOOK.

This is the first time that FILMLOOK has been incorporated into the DVD-ROM format. The game includes feature film-style live action sequences, shot on digital betacam and given FILMLOOK processing and final color correction before DVD authoring and compression. The "Wing Commander--Prophecy" DVD-ROM is available at computer software retailers nationwide.

The last bit was premature. Prophecy DVD was never mass produced, but at least there's always our behind the scenes costume continuity polaroids. 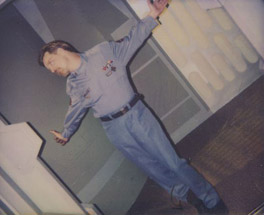