Shades2585 would very much like some feedback on the expanded Secret Ops Guide he recreated and released last week. The guide isn't just about thorough mission walkthroughs. This reference serves as a great collection of the various bits of fiction, press releases and interesting facts about the game as it developed. Ship specs from the Prophecy Gold documentation were added, and stats on weapons are included. Near the end, Shades also put in advertisements for the release and interviews with the developers. It's a neat package for the last original Wing Commander game and a good read even if you're not currently battling the Nephilim. You can grab the 8.5 meg zipped PDF here.

I would greatly appreciate any feedback you could provide me on this. The good, the bad, the ugly. What did you like? What didn’t you like? What could have been done better? What mistakes were there made? What did I forget?

I’m considering working on another upgrade and possibly adding the in-game script. But it will be a while before I do that. This one took up most of my free time, and a lot of work time, over the last four or five months. So I’m a little burned out on it, but I would like to get some feedback so I would know what other things might need to be worked on. Thank for all your input.

Ready For Link Up

It's Summer cleaning at the CIC -- Blonde has gotten rid of all the dead ends in our Links section. We now have solid connections to some two hundred Wing Commander related websites, but we know there's plenty more out there. Let me know if your website is not included or if its URL has changed. And although more will be coming soon, it's never a bad time to check our the Links section and visit other Wing Commander sites. 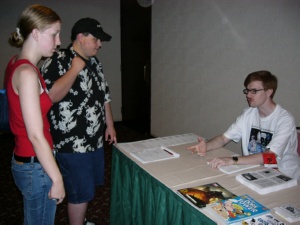