The WC Pioneer team has provided a little bit more information about the general structure of their upcoming game. The Corsair and Scimitar models have also been finalized. It appears the paint schemes will probably be changed around and updated to reflect various environments, but you can get a peek at the fighters with mounted guns now. 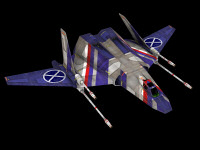 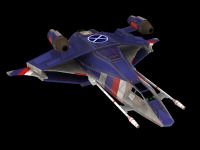 The game mechanics are going to be very similar to the original Privateer. One of the major differences is that we're actually going to allow you to become a full-fledged pirate, rather than the Privateer version, where nothing much changes besides the Faction standings. So - you'll have the ability to own an Pirate base of some sort and to get the benefits thereof.

The entire game is going to be from the first-person perspective. This means that you'll be walking around bases, talking to fully modeled people and things. If you need to get a new gun, you walk from your ship on down to the Ship dealer, purchase the gun, and have it delivered to your ship on the landing pad (You'll have to remember your pad number). This is not as hard to pull off as it sounds at first. We're basing the art and mechanics of the base system off a totally modular design. So people will be completely random, as will the various base layouts.

This also applies to walking around your ship - although this is a later feature than the ones we've got planned right now.

You hire crew to man your turrets and to repair your ship. You can also hire a Co-pilot to fly the ship while you use the turrets. He also helps keep track of things happening around you. He's kinda similar to the narrator - he informs you of anything noteworthy that's happening. The Mechanic works the same as a Repair droid, except the initial cost is less - but you have to pay him a salary. Same with the rest of the crew. They'll have ratings - a level 1 turret gunner is not that great of a shot - but he's better than an empty chair. A level 5 would kick everyone's ass and auto-tractors goodies into your hold.

We're kinda undecided how they'll divvy up the cash - either a flat rate per time you take off, or a percentage of the takings of the last mission you flew. Definitely up for suggestions there.

The project now has a set of Forums as well, so additional topics and questions can go there.