We've got two classic game reviews today from Winter 1996-1997 (or summer for the Southerners). One is short & fat and one tall & skinny. They creep a bit closer to modern times than some of the other GamePro scans Jonathan Stone has been able to dig up. Privateer 2 launched in December 1996. It was a relatively quiet launch with dates uncertain and a nasty bug forcing some last minute fixes. British Wing Commander fans back in 1996 had to rough up Hal Taffin or risk falling off the story's path, but rough and tumble privateers weren't about to pay him for information anyways. Wing Commander 4 for the Playstation launched a couple months later. Although parts of the game were eliminated to fit on four discs, we got some neat small extras. The WC4 PSX website produced this exciting letter from Dr. Brody to Captain Eisen which helped us firmly establish the dates that the game took place. 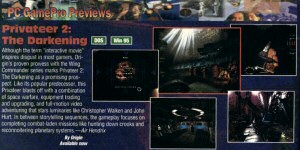 PROTIP: Save your torpedoes. They're the only ordnance that can take out certain rebel ships.

Another helpful tip from GamePro. I'll remember that next time I'm playing X-Wing!