Rapier II Gets A New PaintJob

Cyberion's Rapier II model has received an upgrade pack. With the Lightwave model and this extra texture file, you can repaint your Rapier in colors inspired by the Border Worlds. 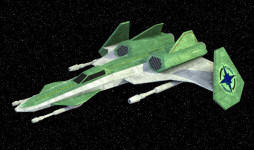 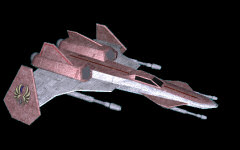 Popular Wing Commander novel author William Forstchen has posted a minor update to the fans at his message board. He has been very busy these last year or two finishing up his Gettysburg Trilogy and caring for his ailing parents. Sadly, both of his parents passed away during that time. Lately he has moved away from science fiction and fantasy and has chosen to focus his writing on a more recent timeframe.

I will confess to a tad of disenchantment with the SF & F field these last few years. I feel we’ve or maybe now its they, have lost a sense of vision that the old masters such as Clarke, Heinlein, Sprague de Camp and others carried. Positive or cautionary tales of the future, independent works, not driven by the latest craze or media phenomena, and a field wherein a wide variety of political views were accepted, as it should be accepted by all Americans. It seems that political correctness and deconstruction have crept in and far too much formula writing. I think there are far too many book #xxx in too many series, rather than new and original ideas. My friend Sprague de Camp use to tell me no series should go for more than four books, unless you radically shift characters and POVs...

My many thanks for your kind thoughts and speculations. It stuns me at times and really means the world to me. . .honestly, it really does. In fact I’m stunned to the point of not even being able to reply. I hope that what comes next will not disappoint and know that your kindness really strikes to my heart and is deeply appreciated.

You can read his full remarks here. There is also some new commentary and criticism of his 1945 novel here.

War Of The Worlds Open Today

The new War of the Worlds movie opens today in the US to pretty positive reviews. Star Tom Cruise took the opportunity today to announce that he firmly believes in extraterrestrial life. Unfortunately he's also taking every opportunity to argue with interviewers about the crazy cult he belongs to, so the message will probably be lost in all that.

Asked in an interview with the tabloid daily Bild if he believed in aliens, Cruise said: "Yes, of course. Are you really so arrogant as to believe we are alone in this universe?

"Millions of stars, and we're supposed to be the only living creatures? No, there are many things out there, we just don't know," Cruise, 42, said in the interview published in German.