eddieb's Flight Commander has been updated with a few additions to help out mod makers and fans interested in making some missions. The first upgrade is a Prophecy style ship viewer which could potentially be used to select a fighter before a campaign or simulator mission. The display is somewhat basic right now, but we can expect this to improve as the game develops.

The second addition is the ability to read 3D Wavefront .obj files directly in to the game, without needing to go through the traditional special Flight Commander conversion. As an example, eddieb has been able to directly import Cyberion's Rapier II model which was released a few days ago. 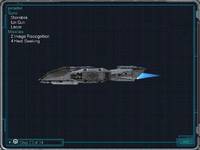 If you'd like to play around with the new update, you can get the file here, but you must be sure to apply the two previous updates first.

Some time ago forums member Sylvester released the introduction to "Wing Commander: A Fool's Trip to Hell." You can read parts one and two of the first chapter here.

Loud noises of varying type echoed through the vast flight deck of the TCS Tiger's Claw. The fighters of the strike carrier were lined up neatly in a row for the morning sorties that soon would be leaving her. Multitudes of Scimitars, Hornets, Raptors and the soon to be retired Wildcats sat quietly, waiting for their pilots. Some of the craft looked abused, metal plates covering laser hits, and miscolored parts taken off a fighter that wasn't so lucky on the last mission it went out on.

Today marks the first anniversary of ace Hyphen One's marriage to blonde Hyphen One. We can only assume that the past year has been a complete success since so far they've only murdered each other in Halo. Although there's no sign of a mini Hyphen One yet. We'd also like to remind people that it's still ace's Happy Month. You can see more pictures from the big day last year here. 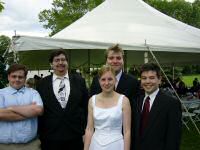 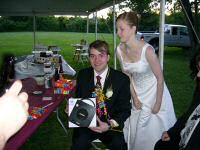 It's also LOAF's parents' 25th Anniversary. What a coincidence. Congratulations all around.