Revisit Our First Ever Dragon*Con

This year will be our fifth visit to the Dragon*Con convention in Atlanta, and we managed to dig up a never-before-seen raw video from our first meeting in 2001. We do things a bit differently these days. Four years ago we didn't have our own flightsuits, and we spent a lot of time manning a table full of neat WC things next to Joe and Paula's Origin Museum display. We also didn't really know about the best things to see and do. There were still tons of really fun things going on though. While at the convention Origin producer Mark Day sent a box full of goodies for the museum. In the video you can see us investigating things such as Seether's helmet, a WC3 Kilrathi gun and a WC4 pistol. The clip also includes a confrontation with Aaron Allston and copies of Claw Marks in what has become an almost annual autographing tradition. 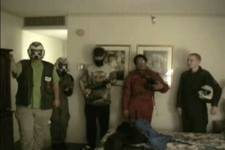 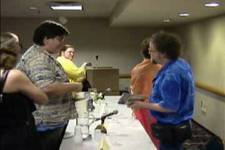 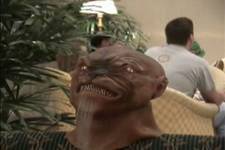 Everyone is welcome to join us for this year's gathering September 2-5 in Atlanta. For details about the convention itself, see the Dragon*Con site. You can download the 144MB video from 2001 here or view a limited set of photos here. Unfortunately most of the photos got lost in an accident involving Joe's cat and urine.

In April of 1995, a few months before the Wing Commander CCG came out, a press release was posted to the rec.games.trading-cards.announce newsgroup by Margaret Weis. At the time she was president of Mag Force 7 and involved in the development of the game along with Don Perrin, various designers and Origin personnel.

The computer game WING COMMANDER III cost over four and one-half million dollars to produce, making it the most expensive and the most exciting computer game ever created. Its cast of Hollywood stars include Mark Hamil, John Rhys-Davies, and Malcolm McDowell. The card game will feature these stars with their own cards--not as stills, but as photo-realistic paintings by some of the most talented science fiction artists working in the field today! The card game will be sold in a single-deck format, featuring Red Decks for the Kilrathi--the giant cat-like aliens of the WING COMMANDER universe--and Blue Decks for humanity's defenders, the Terran Confederacy. Booster packs will contain a mix of both Kilrathi Red and Terran Blue cards.

A full copy of the press release has been mirrored in our CCG section along with a credit list. RPG resource site Pen & Paper also has a record for the Wing Commander CCG in their game database.