Out of all our Merchandise, we get the most questions about flight suits. We're now working on coming up with a new batch of Prophecy-style suits for people to order, but some people might be interested in getting the real thing. A very small number of screen-worn suits are in circulation for Wing Commander fanatics to add to their collections. Because of the limited nature of these items, most of the units left around are from the Wing Commander Movie and exist in various prop houses around Europe.

The Propstore of London has several types of flight deck jumpsuits and vests. They sell blue duty uniforms and crew jackets for a reasonable price as well. Movie Bits has a variety of technicians' tops, jumpsuits and a full red flightsuit. They stock a marine backpack as well. Rare Props also has a couple technicians' gear. Costume Junkie is where you can find a Movie naval officers' uniform, though not for cheap. And if you need a Rapier, Weird and Wonderful is the place. They have two F-117Bs in stock with rentals beginning at £2000.00. Word is that they'd probably be willing to sell one for £8000.00. 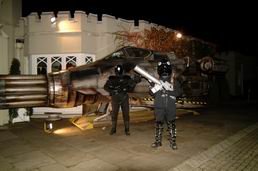 Everyone Needs A Kilrathi Statue

I always felt like the Limited Edition Kilrathi Marquettes got short-changed. We excitedly reported on them years ago when Prophecy Advance was in the news every day. But since we didn't exactly know when the game would launch, the release announcement came hours later, and the Marquette update got pushed down. The wonderful statues were buried under tons of Prophecy news and somewhat forgotten. They still exist however, although just five were produced. The price has gone up. They're now $389.00/£250.00 (maybe the exchange rates just shifted), but they'd certainly be an exotic piece for your Wing Commander collection. You can order your own at the Propstore of London here.

A Marquette of a Kilrathi warrior as seen in the sci-fi movie Wing Commander. The model was pulled from the original mould for the original Marquette. It has been professionally painted with great detail paid to the metal effect armour. It comes with a custom made wooden stand. The figure stands 70 cm (28") tall. This stunning display piece is strictly limited to just 5.