More people have been wondering lately about the second episode for the Standoff Secret Ops mod. The team has been hard at work building content that will provide structure for the rest of the game. Since the environment will transition quite a bit from Episode 1 to 2, there is quite a bit of work to be done. These efforts should help future episodes come more quickly however.

Basically, we are two cutscenes, a few voiceovers, and some bug-fixing short of a release, but due to the unpredictable rate at which voiceovers usually come in, I'm not going to announce a release date just yet. Rest assured that we will be releasing this episode *soon*, and that the following episodes will have shorter development cycles. We still had to fix a lot of ship models for Ep 2, and get all the Sim missions and the Sim music in, apart from the usual voiceover and cutscene trouble. For Episodes 3 to 5, all of those problems will be reduced (some of our great voiceover people have already completed all of their Episode 3 lines, for example). 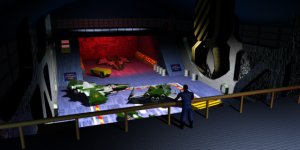 AD came across a pretty interesting connection between Wing Commander and Jem! and the Holograms. In the archives of the Jem mailing list, someone asked series creator Christy Marx if she had her likeness used elsewhere. Sound familiar? Major Kristi Marks played an important role in securing the KIS Ras Nik'hra in the Firekka System in 2655. Ellen Guon was a writer for Jem who was heavily involved in the creation of Secret Missions 2 and Freedom Flight.