TomGaines has dug up and encoded the Hobbes funeral scene from Wing Commander 3. The video was left on the discs, though the normal course of the game will not reveal the clip. Since Hobbes played such a role in the later story, theoretically Hobbes would have been vulnerable to die if they had designed a more extensive permanent losing track earlier in the game. For many years a hacked savegame has been circulating which allowed access to the video, and there was also an mp3 recording of Blair's speech. You can grab the 2 meg avi and see the scene yourself here.

Electronic Arts has announced their Fiscal 2005 (ending March 31, 2005) results. You can find a recording of their conference call yesterday here. Total revenue reached a record high with a 6% increase while net income suffered a 12% decline. The revenue figure was $3.129 billion and income $504 million. Although results for the overall year were great, their fourth quarter figures were down sharply from the previous year. The company had 31 million-selling titles compared to 27 in Fiscal 2004. The Sims and Need for Speed franchises each sold more than 15 million units, and EA announced that they expect 9-12% growth for the current year.

The Playstation 2 represented more than a third of their business, while XBox and PC sales came in around 15% each. GameCube and combined handheld revenue was about 7% each. Copublishing, distribution, subscription services, licensing and other areas accounted for the remaining 20%. Just over half of their business was generated in North America, with Europe comprising 40% and Asia 8%.

The outlook for growth over the next eighteen months is very positive. The launch of next generation consoles, combined with exclusivity agreements with the NFL, AFL, NCAA, ESPN, FIFA, Nascar and PGA Tour will allow them to charge a premium price and hold a commanding position in the new console cycle. They now employ more than 6100 people, up more than 25% from a year ago. 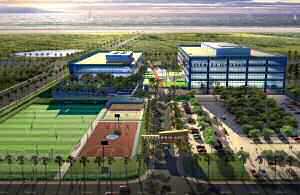