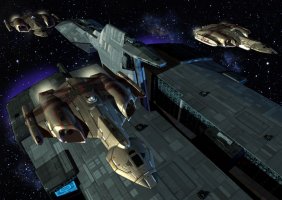 GamersAgainstEAGames.com has set up shop on the internet to educate the world about Electronic Arts' shady practices in the games industry. They are attempting to document various acquisitions, licensing deals and corporate decisions to illustrate a negative trend. This mission also apparently includes trying to get advertisers, affiliates and sponsors to generate a little cash on the side (to not buy EA games with).

What are we looking for in a game that we buy. Great graphics, good story line, Runs smooth, Good tech support, Fair price, Among many of the other things. If you agree with the above small list then our advice for you is to stay away from EA games.

Past history shows EA has dropped support on there games faster then any other company out there. Past history also shows the games are released before they are ready to be released which means games full of bugs that customers become beta testers instead of game owners.

With cold hard evidence like that, can the $3 billion behemoth hold its ground? If that's not enough, they're currently trying to hold a contest for its members to create anti-EA screensavers.

Oh man, the calendar says it's not April Fools' Day anymore. These guys are for real.