A lot of people have recently had questions about how jump points work. In the Wing Commander universe, the galactic network of jump lines connect systems with eachother. It gets a lot more complicated than that. Mini jumps, double jumps, long jumps and more create a complex dynamic. There is also a considerable amount of information on how spacecraft utilize these tunnels. And the traditional jump lines are not the only means by which travelers in the 27th Century move faster than light. LOAF has updated his Jump FAQ with the latest information for you to consult. You can find the FAQ here.

Were space devoid of gravity, it would be completely a flat plane. However, every object which creates gravity causes an impression in this plain -- the size of which is based on the mass of the object. Where these impressions connect to one another, a jump line exists. Objects of higher mass, which cause deeper impressions, are more likely to cause and effect jump lines. It is for this reason that stars (99.85% galactic mass) produce the vast majority of jump lines, whereas planets (0.135%) and other objects (0.0150002%) cause only minor fluctuations. In addition, high concentrations of antigravitons also warp the plane of space. Such occupancies exist in nature, but are uncommon. 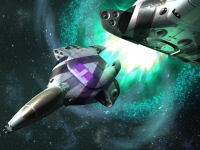