After a lengthy period of beta testing, John Cordell from the Privateer Remake team has a special announcement to make.

we will release the Privateer Remake 1.0 if no further problems occour in approximately 36 hours. Then you will be able to download it from your favourite base at http://www.priv.solsector.net. 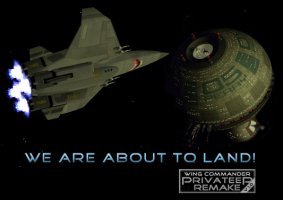 There you have it, folks. 36 hours would make the release fall somewhere on either Sunday or Monday. When the time comes, we'll have the news here as well. This is the second of the long-awaited mods to get a release in the past few months. It's a good time for mod fans.

A Look At Frontier RPG

In the third in our series of looks at the online WC RPG scene, today we feature the Wing Commander: Frontier RPG. João Marcelo Beraldo is here to tell us what his RPG is all about.

Wing Commander: Frontier (http://wcfrontier.com) is a different style of wc rpg going since Mid 2001 and growing day by day. The story happens in the Frontier, a region of space beyond Gemini, where the Confederation has little control over the dozens of independent worlds and alliances that were formed after the sector was mostly left to fend for itself due to war cutbacks.

In the middle of this turmoil, seven worlds join forces as the Frontier Alliance, and forms its own defense and police force. Players play the part of militia pilots, trained both on ground and space, as part of an elite unit whose mission is to keep the Alliance and its conterparts safe.

The game uses IRC and Message Boards. Game rules include character creation, ground and space combat, cyber and genetic modifications and more. Three new sections of the game are now been released: Mercenaries (become a mercenary or bounty hunter and take on dangerous missions for money and fame), Crimson Kings (be part of the forntier police in the remote years of Frontier colonization) and Iceholme (join the elite forces of the frozen nation of Iceholme in its fight for survival in the war-torn world of Tiberias).