All Dressed Up And Ready To go

I really like flight suits, but sometimes you're in the mood for something a bit more casual. The light duty movie outfit is a simple two-piece set done in strong blues with a CSS Tiger Claw patch. The top is a padded sweater and the pants are of a thick material with bungie cord and zipper fasteners. There is a button flap on the back. This one is a screen-worn prop from the Wing Commander movie, but we're thinking about the idea of making a light duty Prophecy style outfit with spare materials from flight suit construction. 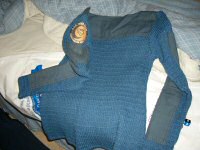 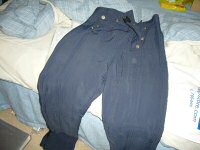 We Destroy Worlds! Get It?

Apparently today is a clothing themed day, so up next we have the latest Origin Crusader shirt obtained by ZFGokuSSJ1. The front is similar to his last shirt, but the back has a joke about the OSI Loose Cannon team's explosive games. 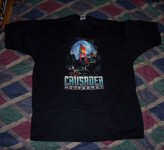 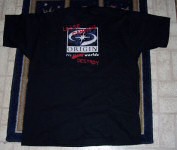 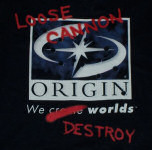