A few years back we did an update about some concept art for Wing Commander Online. Limitations kept us from hosting the very cool images locally at the time, and eventually the original host took them down. Eder has helped us restore the images, and he even found a couple that we missed originally. You can now find them all here. These were created back in August of 1998 (a good month for WC fans). For a little more history on Wing Commander games that were in the works back then, check out our Privateer Online article.

At one point Eder tried modeling some of these conceptual designs. It's pretty interesting to see how they might have turned out. 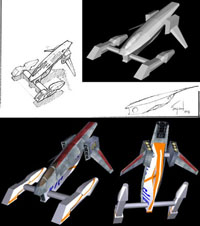 Happy Birthday To The Sims

Electronic Arts announced this morning that The Sims will turn five years old this week. I remember people talking about this with some anticipation back in the late '90s, and it's already been half a decade since release. I'm not sure anyone thought it would be as popular as it has been however. The base Sims package has sold more than 16 million units, with its seven expansion packs adding an additional 38 million sales. The Sims 2 is on track to hit 5 million copies sold soon. Its first expansion pack is due in three weeks.