The last round of CCG trading was big success, so I thought I'd see if anyone else still has incomplete sets. With the notable exception of a number of glass prizes, most of the various physical shipment items that have been accumulating for the last several months have been taken care of. If you are missing a few cards, send us an email. This is just for trading to complete sets, not for people looking to start collecting. Any questions pertaining to the Wing Commander Customizable Card Game are welcome though. 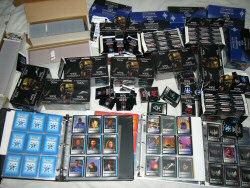 Continuing the interviews that began with Warren Spector last week, GameSpot asked Raph Koster about his ideas regarding 2004. Koster was a lead on Privateer Online at Origin.

There's also a lot of games from past years that I am still playing--the Karaoke Revolution games are a hit with my daughter, so I end up playing those with her a bunch. Donkey Konga too, and I just got Taiko Drum Master, which is similar but different. As you can tell, I do a lot of "offbeat gaming."

His favorite personal highlights from game development in 2004:

The inclusion of voice-over for non-player characters in Everquest 2 set, I think, a big new benchmark for MMORPGs. It really makes a difference. I think the [Star Wars Galaxies] Jump to Lightspeed expansion also set a new high watermark--I don't think any MMO has ever done such a massive addition to gameplay ever. It added a whole new way to play the game, and it melded twitch combat into an MMORPG.