Ships of the Animated Series: Transport (4/4)

The Transport, the final design of this four ship series, appears in Episode 2, "The Last One Left." The transport is armed with three single-mount laser turrets (two above and one below) and a dual mount laser battery. 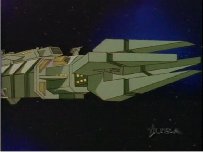 A number of pages have been updated. I have a scanner now, so I've added in some various headings with esoteric fonts, plus added Finley's picture, a couple of missing fighters, and the missile pictures. Oh, I also updated the pics on Paladin's letter too. They're relatively small changes, but I think it makes it look just that much nicer (and closer to the original).

And you can never have enough Null-G Bomblets.