Cyberion Shares Drayman With All

Cyberion has been working hard to prepare a 3D Drayman Transport for people to play with and include in various mods. He has created high detail and low polygon models to fit with different people's needs. Both are available in a pack here. 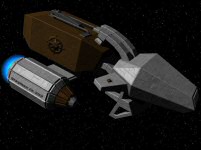 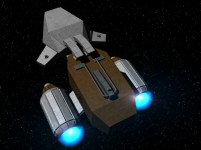 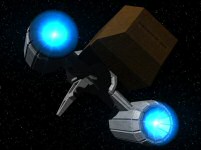 Well, after some time I finally finished the high detailed model of Drayman. I added few additional parts to the model and textured it a little bit. I'm not very good at texturing as I can't draw, but if anyone is willing to texture it or create textures for it, contact me. I would be glad to know this and I will fully support this. ;)

What I'll be doing next I do not know... but it defenetly will be something from WC ships. So far I've done "Hellcat V" model and this "Drayman" model -> I have a huge list to do. Good luck in modeling and long live the WC series!!!

The Drayman looks great. Go ahead and give a thanks to Cyberion if you use his model too.

Several Crius members have started a discussion about the separate Wing Commander role playing games that have sprouted up this year. RPGs can be hard to implement and maintain, and Sangy, Expendable, and Slawter are trying to lend some of their experience to helping the RPG community. They have their own idea for a new project and are trying to gauge interest. There are already other RPGs that need members, so this discussion might serve to bolster other projects' efforts instead. If this is a subject you're interested in, head on over to their thread here.

With our experiances at WCGC we have accumulated a list of all the things we would like to see done and how they should be done correctly in a Wing Commander board based RP. Now we are interested in developing this project into a working Role-Play system so that you, the Wing Commander fan can take his turn to become Admiral Tolwyn, defeating the Kilrathi above Earth, Jason Bondarevsky, sneaking behind Enemy Lines, and William Bainbridge, Defeating the bulk of the Kilrathi fleet at Vukar Tag.

EA Continues To Assimilate And Expand

Hot on the heels of their latest quarterly profit announcement, Electronic Arts has announced two strategic partnerings this week. First up, EA is fully acquiring Criterion Software, which is currently finishing up Burnout 3 and developing the latest version of Renderware. The Renderware tools are used by a variety of companies to create games, and EA will now be in charge of licensing this technology to other companies. Over 500 games have used Criterion's tools to some extent in the past.

EA is also entering a publishing deal with Crytek, creator of the popular Far Cry game. Together they will create an all new PC game in the near future.