There are just three weeks to go until the CIC's Sixth Birthday! We're working hard to bring you some exciting new things this year. In the mean time, I thought I'd show you some of the prizes we have lined up for this year. Door prizes this year will include Game Boy Advances and copies of Prophecy Advance, CIC polo shirts, CIC playing cards, CIC pens, copies of the WC movie, WC4 DVDs, WC movie soundtracks, WC movie posters, WC movie shirts, WC movie action figures, WC novels and a Tom Wilson autographed Maniac photo. The exact quantities of each item haven't been nailed down yet, and we'll probably find a few more neat items along the way. 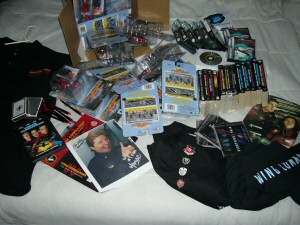 This year's online birthday will be on a Tuesday evening in North/South America and early Wednesday for those in Eastern Europe to Australia. If this is a new event for you, our annual birthday parties are held online on irc in #Wingnut. Details on joining can be found in our irc section here. Feel free to stop by any time to get situated or hang out. We officially start the party on August 10 at 7:00 pm Eastern US time (4:00 pm Pacific and 11:00 pm GMT). There will be dozens and dozens of excited WC fans hanging out together, plenty of cool prizes and great new things to see. I hope you can join us.

Trivia Week 3 Questions are now out for our special summer trivia game. The answers to Weeks 1 and 2 are up, and there is now a scoreboard to see how you rate. You have one week to answer the following questions.

Question 5: What fighter's yaw rate is enhanced by a horizontally rotating thrust pod?

Question 6: What class of ship seems to have been the primary battleship for Kilrathi inter-clan civil war for at least a centruy before contact with humanity?

Bonus 5: What is one type of ship that would mount Mark 33 engines?

Bonus 6: The Kilrathi scientist Hajjnah gave the Confederation blueprints detailing what ship when he defected?

You can email your answers to trivia@wcnews.com or fill out the form.

The TCS Paradigm, Not Just For OFX Anymore

Wing Commander veterans might recall the TCS Paradigm made its debut in the Origin FX Screensaver shortly after Wing Commander Privateer was released. It's a cool ship that we never learn much about. Ever wonder what happens when you type "TCS Paradigm" into Google and hit the "I'm Feelin' Lucky" button? Well, Bob did and he got some interesting results.

Is TCS always possible? I think I have discovered the very interestingly wrong thing about this question. In order to ask the question, one must have come to understand what TCS means (otherwise, the complex project of taking children seriously would not be presenting itself as a problem to you), and once one has come to such an understanding, it is no longer possible not to take children seriously.

"The TCS Paradigm Shift" would make a great title for something Wing Commander related.