Vega Strike Gets Vweps Vega Strike is one of those projects that has been going for many years, and despite "going gold" late last year, it's still advancing. The latest addition to the engine is vweps. What are vweps? I'll let MamiyaOtaru explain:

Vega Strike, as you may know, can use vweps. ie the guns on your ship look like they should. If you have lasers, you will see lasers in the external view. If you have plasma, you'll see plasma. Same with the other ships.

Scheherezade has come up with some great models for the Privateer weapons. Attached is a pic of an Orion mounting a couple Tachyons flying past Perry Naval Base. 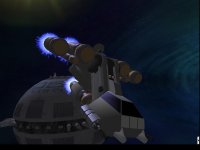 This shot is of a Galaxy sporting Mass Drivers. The texture on the Galaxy is better than the Orion (wasn't me that did it) but the lighting doesn't show it too well. That's ok though, this pic is about the guns. 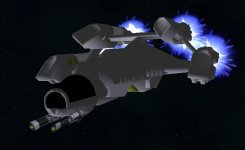 When we first looked at this game back in April, it was already shaping up to be a great looking game. Featuring atmospheric flight as well as space flight, along with a strategy element as well, it combines features bound to appeal to a lot of WC fans. Now the game has been released, and if you don't want to head to a store you can even buy the game online and download it straight away. It also looks like some WC fans are already interested in modding the game. You can find out more on the Starshatter site. 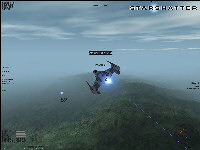 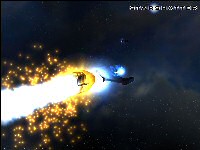 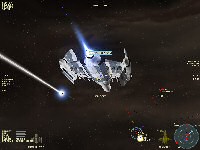 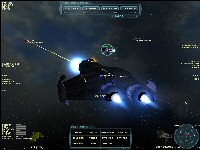