Not to be outdone by The Wuqked, forums poster StewMc has created some of his own cover art for anyone wanting to replace their old WC game CD cases with nice new DVD keep cases. He has made covers for WC II Deluxe and Prophecy (featured below). If you want to use a triple-width case for your all of your Prophecy CDs, a version with a wider spine is available here. If you missed the earlier covers, you can find The Wuqked's Privateer, Armada and WCI/II covers in this update. 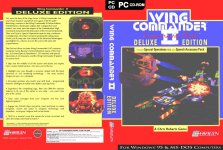 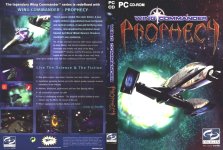 Love these or want to help with making more? You can comment in this thread.

Heads up, Dragon*Con attendees: Aaron Allston's official site has been updated with word that he will be attending D*C 2004! That means we need to start collecting copies of Claw Marks to once again innundate him with at once! (Mr. Allston wrote/edited the original Wing Commander game's classic manual, and for two years we've tried to get him to sign as many copies as possible.) If you're going to be at the convention, stop by the forum to let us know.