Thunderbolt on the Loose

Wing Commander artist Sean Murphy has a portfolio online where he displays some of his work. There is a big Origin section with artwork from Bioforge, Strike Commander and Wing Commander. This stunning 1280x1024 rendition of a Thunderbolt really stands out and makes a great wallpaper. 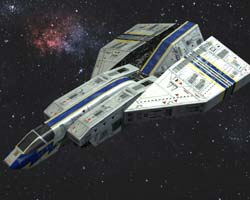 There is also a neat Space Quest 5 area (under Dynamix) for all you Roger Wilco fans.

What You Need To Know About D*C

To celebrate the release of the new Dragon*Con website, we decided that now would be a good time to update about TyeDyeBoy's D*C FAQ. If you have never been before, it tells you pretty much all you need to go about going, including why you'd want to go in the first place. Additional posts by other experienced D*C veterans cover the rest.

1 - What the bloodly hell is DragonCon?

D*C is a sci-fi convention held anually in Atlanta, Georgia. It happens in late August-Early September (this year it will be September 3-6) at a couple of hotels downtown. Recent years have had upwards of 20,000 attendees over the weekend. The events involved vary every year, but you can expect to see everything from classic Sci-fi (Star Wars, Star Trek, Babylon 5) to fantasy (Lord of the Rings, Dragonriders of Pern), to horror (there are wannabe goths EVERYWHERE) to pretty much anything else even remotely related. There are discussion panels, costume contests, gaming events (lots of gaming... whole lot of gaming), live music here and there, and the list goes on. www.dragoncon.org is the official site, though it's down at the moment.

Are you kidding? It's a nerd paradise. Ever wanted to wear Spock Ears or Jedi Robes to school? You'd get laughed at, wouldn't you? That won't happen here, because everyone feels the same way. In addition to that, there are dozens of kickass chances to meet your favorite stars (Aaron Allston wrote some WC and Star Wars stuff, we've met him a couple of times, he's a great guy), and attend panels that they discuss genres on. Plus there are collectibles that you can't find elsewhere... though those get pricey.

On top of all of that, we do tend to have a great time amongst our tiny WC crew. The parade was a helluva lot of fun, for example. It is also incredibly cool to be recognized by other attendees. The first year a few of us wandered about wearing flightsuits, and a small party of Klingons joined us on the elevator and chatted about how great WC was.

You can ask questions or comment on the advice given in this thread. It's worth reading just for the Joe Garrity/Alice Cooper story and the Danger Woman story. The Danger Woman event has scarred me for life. So to sum up, everyone needs to go this year. I go from the UK, so no excuses about it being too far away.