Let's take a step back from Wing Commander for a moment to talk about something almost as important: the latest Star Trek series, Enterprise, is apparently in danger of being cancelled. If you're a Star Trek fan, I'll personally vouch for the fact that the show has significantly improved in quality in its third season. If you're not, read on for details as to why this is important.

Let me relate this to Wing Commander, through a hitherto secret tale of intrigue: Back in October, 2001 we received a phone call from a TV producer who was working with Chris Roberts to develop a Wing Commander television show. He wanted our help with some statistics: how dedicated is the fan base, what kind of traffic do we do, how many Wing Commander websites are there? I knew that the concept had been (and presumably still is) floating around Hollywood for quite a while, so I asked him why there was now an interest? His answer: Enterprise's premiere episode, Broken Bow, had scored much higher than expected ratings and the industry was interested in developing similar shows.

The lesson here is the same one we learned from Freespace - the success or failure of a similar product affects the entire genre. If Enterprise had been a smash hit through its first year we would probably be watching a Wing Commander show right now. More than that, though, if Star Trek is cancelled then everything built on its back will be in danger; saving Enterprise should be just as important to Stargate fans and Battlestar Galactica fans and Wing Commander fans as it is to Trekkers.

You can find mailing addresses, phone numbers and the like for who you can contact to plead the show's case at SaveEnterprise.com. Do it if you love Star Trek, do it if you hate cheap reality TV or do it if you just love Wing Commander.

Return of The King

Major Striker, Wing Commander fan artist extraordinare, has a new picture for everyone to enjoy. Here's his explanation from the forums thread: The Ralari and gratha are my 3d models of course, the guy on the left is me, the girl on the right is Jennifer Connelly and of course the guy in the uniform in the middle is Elvis, the King of Rock 'n Roll!!! Well, of course! Enjoy: 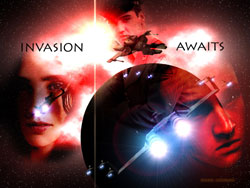