Sunglasses Not Included With This Wallpaper

Tolwyn's latest WC Saga Wallpaper features a gorgeous Arrow veering away from an explosion. It's formatted for 1280x1024 screens and is able to light dark rooms with its presence. 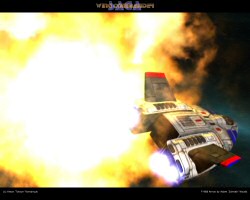 It is not nearly as advanced as my previous art, but on the other hand it is my first try to create a good looking explosion ;) I hope you will like it.

The May 10 Issue of US News & World Report has a lengthy article by James Pethokoukis on EA's continued dominance of the video game industry. It seems like I've read this article several times over the years, but it's no less true today. There are some neat bits of information included throughout as well (and some funny factual mixups). They note that EA has 22% of the game software market, doubling second-place Nintendo's 11% share in North America. They cover 30% of Europe. The article mentions that EA is still targeting goals for online revenue (15-20% of total revenue in the next console cycle), which is one of the things that caused much grief with the Secret Ops sequel and Privateer Online.

So let's see here: EA is the major force in a fast-growing industry and--even better--looks to be making a power play in the one sector it doesn't dominate. Perhaps Probst should start holding meetings in one of the company's other conference rooms--the one nicknamed "Resistance is Futile."

You can find the whole article here.