The Standoff team has released another pair of shots that show the Crossbow bomber in action. It is also the first time the environment in the Warsaw System has been shown off. The beautiful Hakaga that was leaked as a wallpaper a few weeks ago also makes a surprise appearance.

The mod looks better with each batch of shots!

King Graham over at Crius has tested the new version 0.61 DOSBox application for running old DOS games in Windows and other operating systems. Apparently there are some good bug fixes that help out a lot. The tech support fans at Crius have all sorts of tips to get everything from WC1 to Armada running on some level. This is critical as it becomes a way to run Privateer/RF/Armada in Windows XP! Sometimes sound can be difficult to get running, but other times you get added features such as the ability to use newer USB joysticks with the old games. A few WC games are even officially "supported" by the program. 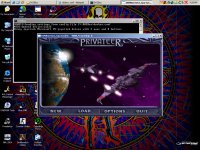 Thanks to Mercury for the screenshot.