Following our update earlier in the week about Mark Vearrier's Prophecy poster auction, Rylex mailed us about another option. It seems that Germany produced its own version of the Prophecy poster. It's lacking the credits from the limited edition US version, but it'd still look great. Luckily for us, Close Up Posters seems to have them in stock. The site is based in Germany, but they will ship just about anyway providing you have a credit card that they will accept. You can find the product page here. 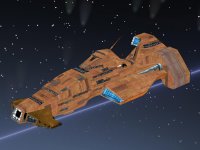