Corsair(pilot) has released two more images showing off the characters in his Animated Serial project. They remind me a bit of the later Space Quest games. The whole project looks very slick and I'm anxious to see what else he has in store. You can help Corsair with the project by providing feedback here. 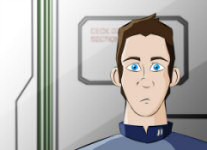 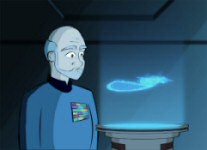 Problems With Some WCA Episodes

Hey, we've detected a couple issues with the high res Wing Commander Academy downloads. Episode 5 - Lords of the Sky should not be downloaded right now. The second third and final third of the episode repeats itself. The file should be fixed shortly. Sorry if you've already burned a disc or something of that sort. Thanks to Rion and PrinceThrakhath for pointing this out. You can find the links to the other high resolution episodes here. Right click on "Klicke hier, falls nicht" and select "Save Target As" if you're having trouble downloading.