The mighty Fralthra has been imported to the Secret Ops engine for Standoff. It looks quite impressive. I really get a kick out of seeing the older ships in the Vision Engine. The third shot below also showcases the new flak turret effect that the Standoff team has created. 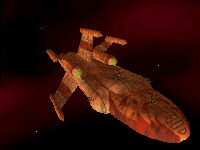 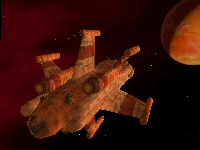 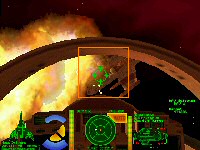 You can find other screenshots from Standoff here.

Tolwyn has announced the storyline and premise for the introductory campaign for WC Saga. This is where the game will begin when the project is released.

The flagship campaign of Wing Commander Saga, “Front Line of the Devil” begins right before Wing Commander 3 and concludes with the ending of the Terran-Kilrathi War (whether or not the Terrans win depends on you).

It has been six months after the Battle of Earth, and in spite of new fighters, carriers, and technology joining the Fleet, the War Effort is not going well. Every day, more news of fresh defeats and losses make their way around the Confederation Forward Fleet, who have to face the possibility that they will not be the ultimate victors.

You are based on the TCS Hermes, one of the handful of large carriers left on the front line. You play the role of Second Lieutenant David Markham, a pilot recently transferred to the Hermes.

And on it goes. The epic campaign will span 35 missions with many exciting features. You can find more information here.