Wingman. Early twenties. Athletic. Strikingly attractive. Also ambitious, driven, and just a bit subborn. Stiletto is a superb pilot and, though more by-the-book than Casey or Maestro, she's not above taking some serious chances.

Stiletto's feelings toward Casey are complex, to say the least. She thinks he is unnecessarily foolhardy; often a danger to himself and those around him. But she also knows he's the only pilot on the Midway who might give her a run for the title of "best." As a result, Stiletto is always competing with Casey; always on the lookout for a way to top him.

Additionally, though Stiletto would never admit it, she is more than a little attracted to Casey. When the two of them interact, sparks fly.

While I was out with the flu last week, the XBox and Playstation 2 version of the new Battlestar Galactica game were released. Far from being a cheap television tie-in for the new series, the game comes out quite well and ends up being about the base space combat simulator for the consoles right now, though with the exception of Mace Griffin and some Star Wars stuff, there's really not much. The going rate is $49.99 in the US. While Crimson Skies and Ace Combat 4 come off as probably the best flying games overall, if you're into a space fix Battlestar Galactica should do nicely. 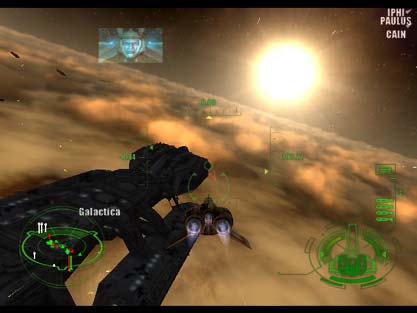 You can find some of our earlier coverage here. I'm thinking some Dance Dance Battlestar with my new pad sounds like fun about now.

Saturday marked the -651st anniversary of the destruction of the Goddard colony in the Deneb sector by the KIS Sivar. Remember, the CIC now has a timeline and encyclopedia which you can waste hours on, reading an obscene number of records.

The Kilrathi attack the Goddard colony in the Deneb sector with a new type of weapon. The colony manages to transmit a distress call, but contact is lost before the extent of the Kilrathi fleet and the extent of the damage is made clear. The TCS Tiger's Claw is ordered to investigate and assist. Landing crews investigate the Goddard colony. They find that the devasatating attack by the Kilrathi has left no survivors, only wreckage and ruins. A quarter of a million colonists have been killed. The TCS Tiger's Claw is ordered to pursue the Kilrathi weapon in to Kilrathi space and to destroy the weapon.