Tolwyn from WC Saga has provided another video for people to check out. This time it's a scene involving Tolwyn and Blair off the DVD version of Wing Commander 4. Even compressed somewhat this is much higher quality than the original video. The 20 meg file is available from his space here. The file is also mirrored here. 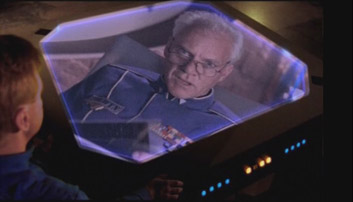 In somewhat related news, the WC Saga Battlegroup Serpent website has been reworked and moved to its new File Planet host. They are hard at work on Awakening of the Claw, their first campaign for this Freespace 2 mod. The beautiful Ferret we posted earlier this week is an example of their work.

Wing Commander Academy Back Up

Thanks to yet another upgrade, we're going to begin hosting Wing Commander Academy again. Today the first two episodes are going up and we'll see how that goes. Episode 1, Red & Blue, is available here as a 65 meg divx avi. Episode 2, The Last One Left, comes in at 63 megs here. Although we previously heard of some incompatbilities playing the episodes in a different divx version from what they were originally encoded in, the latest divx package seems to work okay. Also keep in mind that the episodes we have for download are numbered in the order that they originally premiered. This was actually slightly out of chronological order for the series. You can find the exact ordering here. Happy downloading. We'll have more for you soon.