Is Freelancer as Immersive as Wing Commander?

Today we learned Microsoft has provided a online retailer training module for Freelancer. This is a common practice to help educate retail associates about the products they will be carrying. In the case of Freelancer, one of the possible common questions retailers should expect from customers is "Is this game as immersive as Wing Commander?" If the retailer chooses "Yes," they're treated to the text below.

Good Answer. You know that the same guy behind the Wing Commander series, Chris Roberts, laid out the narrative and gameplay for Freelancer. 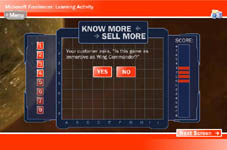 Full IGN Review Open to All

IGN's subscription service works on a time release system (as opposed to GameSpot's limited time public availability), so after a certain amount of time their reviews become open to the public. Prophecy Advance just became unrestricted. If you'd like to read the entire review yourself, it's now available here.

The review organizer MetaCritic has compiled its Prophecy Advance section and highlighted a brand new review. The new review is from Cheat Code Central Platinum. Apparently you need to pay to access much of the site at all, so what we have is from MetaCritic. Apparently their biggest gripe was the control scheme. They rated it a 6.0. You can find more here.

A few people were wondering about the significance of Action Stations and Newt Gingrich in the news yesterday. To answer their questions, we visit #Wingnut.

[LOAF] Let me think about it, first I have my Forstchen story.
[LOAF] Forstchen... wasn't there!
[Zor_at_Work] ?
[TC] wow
[Ghost] wow
[Trelane] Was Newt there?
[LOAF] His wife had food poisoning
[LOAF] Newt was there. So...
[LOAF] I got Newt to sign Action Stations.
[TC] yay
[Trelane] That's great
[SupaMario_] wow
[LOAF] So now I have an Action Stations signed "Sorry Bill wasn't there, Newt"
[SupaMario_] hehehe
[Trelane] That's amazing

For this and other exciting adventures, drop by #Wingnut today!